Audra @ Unabridged Chick has challenged those of us participating in Dewey’s 24 Hour Readathon to find a book with a cover we would love to escape to and away from where we’re at now. 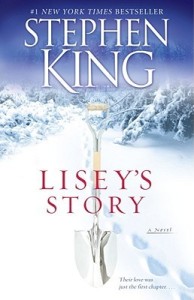 I chose the cover of Lisey’s Story by Stephen King.  I understand that most people living anywhere that isn’t Texas won’t understand how anyone could possibly want to escape to all that snow, but it’s still getting up into the mid to high 90s here in Austin!  Also, I’m not a native, and I was born during the Winter in a considerably colder locale (Japan).  I don’t think I’ll ever get used to the Texas heat, no matter how long I live in the South.  It’s been over four years now, and I’m not convinced I’m acclimated yet.  Plus, I miss snow!!!  I also miss all the wintry stuff that I used to wear and do when I was a kid staying at my grandparent’s house in Wisconsin.  Yeah, I know, shoveling is back-breaking work that no one wants to do, and the salt on the roads slowly destroys cars but forget about all that grown up stuff.  If you’ve ever built a snow fort, snowman, or created an angel in the snow, remember how much fun you had, and the taste of hot chocolate and peppermint sticks, and the smell of pine trees and that crisp cold air.  Don’t even get me started on Christmas!  *sigh*