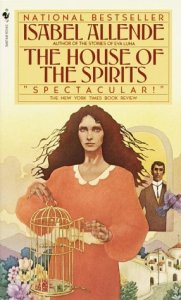 Below is the chapter breakdown that will take us all the way to May 15th.  I’m doing a recap each week, and at the end I’ll do an overall review of the book.  If you’d like to join me, leave a comment!

This week’s recap is for Chapters 6 – 7.  If you’re a little behind, that’s ok!  I’ll clearly mark any spoilers.

SO.MUCH.DRAMA.  What is up with the men in this book?!

*Spoilers* We meet Jean de Satigny, who seems to be the type of guy who really doesn’t care what a woman thinks, and will seek shady ways of getting what he wants.  He reveals Blanca’s affair with Pedro Tercero to her father, but it eventually backfires on him when Blanca realizes she’s pregnant, and Esteban forces Jean to marry her, despite Jean no longer being interested.  The family is crazy, so I kind of don’t blame him, even if I do think he’s a weasel. I don’t foresee the marriage turning out well.  When Esteban is told about Blanca and Pedro, he chases off to find them.  He comes across Blanca and brutally whips her.  After Clara tries to criticize him, he hits her so hard that several of her teeth are knocked out.  Clara decides to never speak to him again and goes back to the city with Blanca.  Esteban goes on the hunt for Pedro Tercero and eventually finds him hiding out in a small shack. In trying to kill him, he only manages to cut off three of Pedro’s fingers.*End Spoilers*

What do you think of the story and the characters so far?  All comments about the book are welcome, but please mark any spoilers.