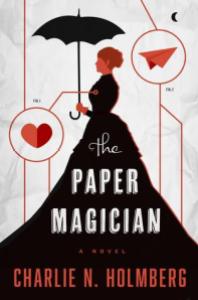 I received this book through Netgalley in exchange for an honest review.

Ceony Twill wanted to be a Smelter, but she’s placed in a Paper apprenticeship with Magician Emery Thane instead.  Emery’s past comes back to literally rip his heart out, and it’s up to Ceony to save him.  Along the way she discovers more about Emery than anyone else knows, and that sometimes Paper is the strongest of the material magics.

I wasn’t sure about this one at first, but it grabbed me and didn’t let go.  The writing, pace, plot, and characters were perfect.  I don’t have a single negative thing to say about this book.  I had a difficult time putting it down to go to bed, and if it weren’t for the fact that I had an exam first thing in the morning, I would have finished it in one night instead of two. The book’s version of early 1900’s England comes alive, and I wanted to be there and become a paper magician.  This isn’t Harry Potter though, not even close.  In fact, it didn’t remind me of any other Fantasy story I’ve read.  On top of that, there are two events that occur towards the climax that made me gasp and cover my mouth in shock as well as cry.

Adding all of that up equals to The Paper Magician being one of the best Fantasy stories I’ve read this year, and quite possibly in my life.  I’m adding it to my “Through the Magic Door” list of all-time faves, and I recommend it for anyone who loves Fantasy in general, and especially for those who love Urban Fantasy.  I’m giving it all the stars!

0 thoughts on “Review: The Paper Magician”