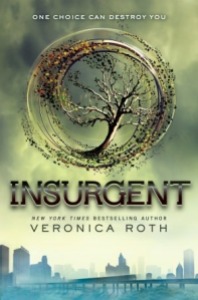 Not long after I finished Divergent, I bought a copy of Insurgent.  I just had to get it.  I needed to know what would happen next.  I forced myself to wait and read something else so that I wouldn’t get burnt out on the story and end up having my opinion of the book suffer as a result.
I’m glad I didn’t wait too long, though.  I had already forgotten who was who amongst some of the smaller characters, but I was able to jog my memory and figure things out fairly quickly.  One thing that stood out to me while reading is that Roth’s writing improved.  No longer did I come across awkward turns of phrase and clunky dialogue.  However, some of the interactions between Triss and Four didn’t make much sense to me, even though I can’t put my finger on exactly why.  Despite that, I couldn’t wait to continue reading anytime I had to put the book down.  I look forward to picking up the final book, Allegiant. 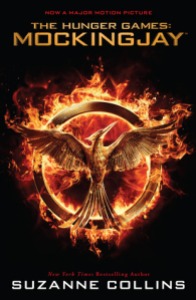 Katniss Everdeen, girl on fire, has survived. But her home has been destroyed. There are rebels. There are new leaders. A revolution is unfolding… – Goodreads synopsis

I’ve had Mockingjay on my shelves for awhile and forgot that I had yet to read it until after I started the first book of another popular Dystopian trilogy, Divergent, by Veronica Roth.  I figured it was about time I wrap up “The Hunger Games” trilogy once and for all.
Mockingjay was difficult for me to get through.  There were parts of it that were just too real for me, having served in the military.  At one point, I had to take a break to read something fun and easy.  I ended up re-reading The Princess Bride by William Goldman.  All in all, though, I needed Mockingjay.  Katniss helped me heal, even if just a little bit.  Collins didn’t end the book with a sappy or sickly sweet happily ever after.  The book wouldn’t have helped me at all if she had.  Instead, she ended it with Katniss’ thoughts on how her past affects her life.  One sentence that had the greatest effect on me:

“I’ll tell them that on bad mornings, it feels impossible to take pleasure in anything because I’m afraid it could be taken away.” 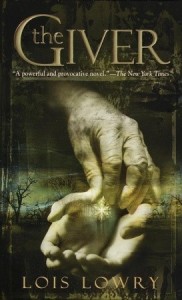 Jonas’s world is perfect. Everything is under control. There is no war or fear of pain. There are no choices. Every person is assigned a role in the community. When Jonas turns 12 he is singled out to receive special training from The Giver. The Giver alone holds the memories of the true pain and pleasure of life. Now, it is time for Jonas to receive the truth. There is no turning back. – Goodreads synopsis

This is one of the many books I’ve learned that lots of kids from my generation read during middle school but that I hadn’t.  I got a copy so I could find out why teachers felt this was a book that was important enough to be a part of their curriculum.
While it’s certainly not the first to point out that perfectly ordered societies are never perfect, it might be the first that doesn’t do so to take a stance against Socialism.  Instead, Lowry seems to be against the idea of a “perfect” society in general.  To attain that level of peace and order, we would have to give up the very attributes that make us human and all the things that give real meaning to our lives.
The Giver isn’t my favorite Dystopian novel.  It’s not even my second favorite.  However, it deserves a solid place high up on the list of “must read” Dystopian fiction.  Having finally read it, I can now see its influence on more modern novels from authors who are close to my age.